Drone, drone, fly away, respect the nap every day.

by Gena Bentall and Alicia Emerson 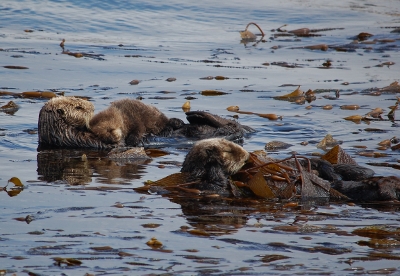 A female sea otter rests in a kelp bed with her pup on her belly as another sea otter nearby surfaces from the depths with a crab dinner. To the general public this offers an alluring window into an offshore world. Aerial views of sea otters captured by drones give scientists and recreational drone pilots a new and intriguing perspective. Until just a few years ago, these kinds of perspectives on marine mammals were limited to research scientists in planes.

Now, with personal drones widely available to the public and becoming increasingly affordable, bird's-eye-views of nature are more readily at hand. In our excitement and enthusiasm at being freed from the bonds of gravity to view wildlife from new heights, we may have forgotten to consider whether our presence in the air has a negative impact on the creatures below.

Less than a century ago a very small population of around one hundred sea otters lived off the coast of Big Sur—remnants of a maritime fur trade that nearly wiped them out. With extensive support from government, university, and non-governmental organizations the sea otters of California are slowly recovering. As they re-colonize places from which they were once extirpated, sea otters’ favorite habitats increasingly overlap with locations popular for coastal recreation, creating a perfect recipe for human-wildlife conflict.

In November 2017, at the 3rd Annual Central California Coastal Wildlife Disturbance Symposium, Sea Otter Savvy program coordinator Gena Bentall met up with AliMoSphere leader, Alicia Amerson. AliMoSphere is a woman-owned small business working to reduce wildlife disturbance from drones, educate proper drone use through best practices, and get drones into more conservation research projects to reduce biologist mortality in small manned plane survey. Our common interest is sharing a message to protect sea otters on land and in the water from drone disturbance. An initiative that we hope spreads to the protection and stewardship of drones for all marine wildlife using the California coast. 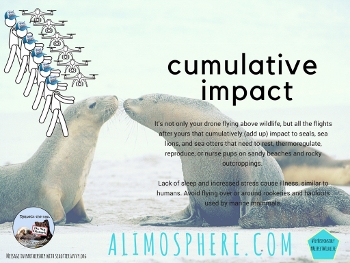 Some tips about sea otters and drones that we are passing along to you:

Sea Otter Lifestyle Quick Tips: Those sea otters who live in areas of highest density are often struggling to meet their daily minimum caloric requirement, and diving and swimming away from human activities causes them to use energy they can’t afford to waste.

Swimming and diving expend more calories in sea otters than most other behaviors.

Sea otters groom and roll in the water to increase air bubbles in their fur which keeps them warm in the cold Pacific waters. They don't have a layer of blubber like other marine mammals. Time spent attending to their fur is vital for survival.

Moms with pups are expending extra energy and should be given extra space and consideration. Respect the moms!

For those unfamiliar with marine mammal behavior, some homework will help you recognize what is normal, and what is an animal's response to disturbance. Plus you have two amazing resources at your fingertips - by connecting with Sea Otter Savvy and AliMoSphere you get information about sea otters and reducing drone disturbance.

Stress—an invisible impact: Signs of stress can be difficult to observe in wild animals.They are unable to tell us with words how they are feeling. Scientists studying black bears originally thought the drones did not disturb the bears, who seemed to calmly sit and observe when the drones were near. Then, reviewing data from heart rate monitors on the bears, they discovered that a bear’s heart rate rose 400% when the drone was near 1. Imagine your heart rate raising 400% and not knowing how to respond! How long would it take for you to calm down? These bears appeared calm but they reacted to drones in ways we can’t easily see. Sea otter moms with young pups may be reluctant to swim of dive away from an encroaching drone or kayak, but may be suffering stress nevertheless.—we truly have no idea how drones impact wildlife. 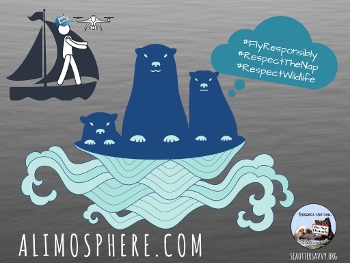 Sea Otter Savvy is excited to join with our new partner AliMoSphere, to foster a community of wildlife aware drone pilots.Connect with Alicia and AliMoSphere here .