What Does it Mean to be an Ethical Wildlife Photographer? 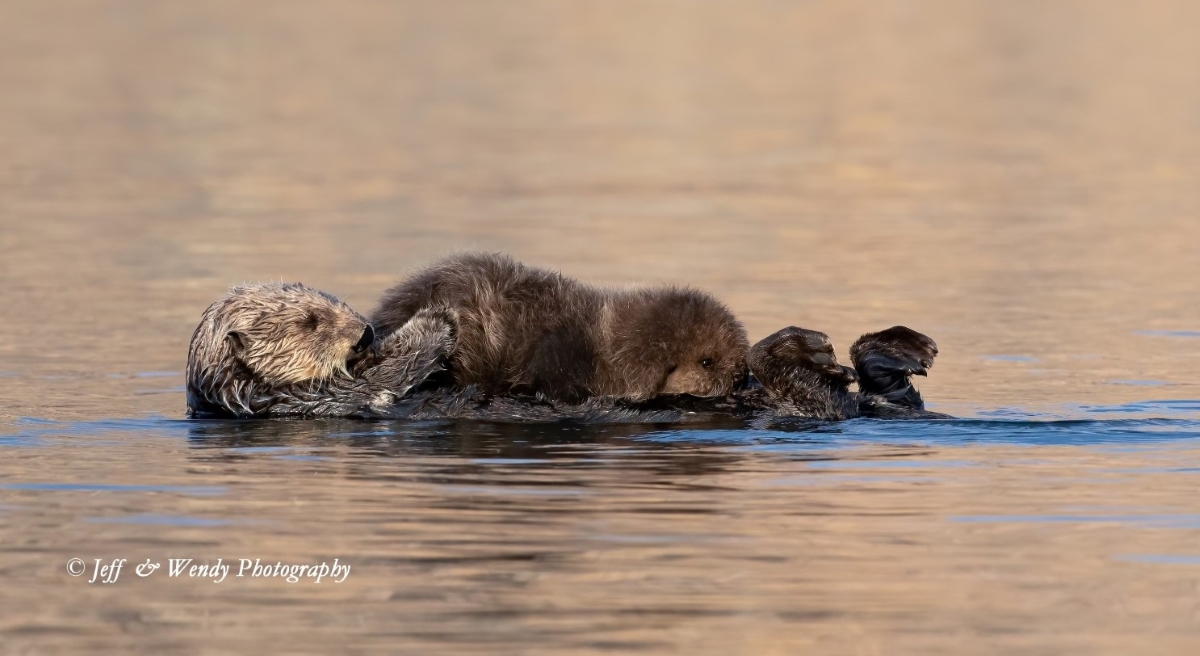 A mother sea otter and her nursing pup are left undisturbed for this portrait. Read Jeff and Wendy's story behind this image below.

By Jeff Torquemada and Wendy Sparks

There is nothing more thrilling than spending time observing and photographing sea otters. They are one of our favorite subjects to shoot and as professional wildlife photographers we have always prided ourselves as being ethical when capturing images of any wildlife subject.

We constantly research the various wildlife subjects we are interested in photographing, so we gain a better understanding of their routines and behaviors. We discovered the Sea Otter Savvy website while doing some in-depth reading on sea otters and were mortified when we realized we had unknowingly compromised the welfare of some of the otters we were photographing! We foolishly thought we were not disturbing the otters when they raised their heads to stare at us before diving under water. We also assumed photographing from our kayak was less threatening to the sea otters because we were low in the water and our vessel was quiet!  Well, after learning more about what defines a disturbance to a sea otter, we realized we had, on occasion, unintentionally disturbed them. In addition to learning how to recognize the behavioral signs of disturbance, we learned these disturbances can result in sea otters diving and swimming away, behaviors that carry an energetic cost to sea otters who may already be just meeting their daily energy demands. It also requires them to groom their fur again to maintain the precious air layer that keep them insulated from the cold ocean. Did you know it may take a sea otter that has been disturbed from rest as long as 15 minutes to groom and go back to sleep?

We now understand preserving an animal’s energy and not disrupting their daily routine is of paramount importance. Those disruptions cause animals to waste precious energy, which they need for survival. Wildlife has a baseline (maintenance behavior) and if this baseline is disturbed it results in unnecessary energy loss. We all need to practice functional invisibility, which is really all about awareness, connection, empathy, and respect for wildlife. As photographers, you want to document natural behavior and not cause that behavior to be altered by your presence.  For example, if you notice a resting sea otter suddenly becomes very alert with eyes riveted on you it is time to move away from that animal.

We believe the most important role a nature photographer plays is being a voice for all wildlife. We need to devote time to learn about the habits and behaviors of our wildlife subjects and recognize how to respectfully interact with them without disturbing their daily routines. We also can serve as role models for budding photographers and demonstrate ethical practices such as maintaining a safe distance from an animal. 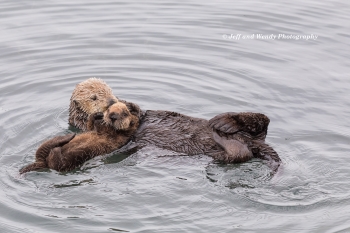 A resting sea otter mother and her pup seeking refuge in a harbor. We were able to photograph them from the landing above their resting area, which allowed us not to disturb them. We shot this image using a tripod and a 500mm lens.Our favorite definitions of ethical wildlife photography

" At its most fundamental, ethical wildlife photography holds the welfare of the animal above any photographic capture. At its most expansive, it promotes increased consideration and compassion for wild animals through practice, education, conversation, and advocacy."   ~North American Nature Photography Association (NANPA)

"If you have an idea on how to capture an image and you’re asking yourself questions about whether or not it is ethical, then it most likely isn’t. Putting wildlife first is of the utmost importance. An image is not worth the disturbance, or even the life of an animal."  ~Jeff Hogan, Wildlife Videographer

We would like to share a few images that will assist you in recognizing what is considered a disturbance. 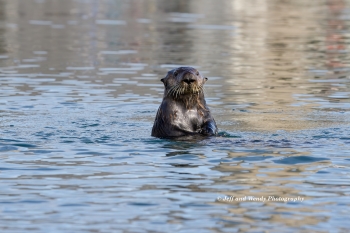 What not to do: attract attention to yourself

This image taken in 2015 was shot from our kayak with a 100-400mm lens extended to 300mm and approximately 40 feet from the otter. This image is not cropped and demonstrates we were way too close and clearly disturbing the sea otter. 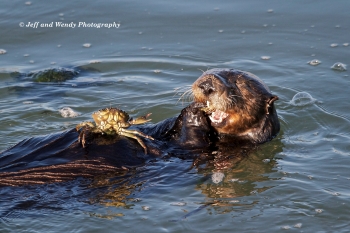 What to do: feature natural behaviors

We photographed this sea otter in the early evening while it feasted on crabs. We positioned ourselves on the jetty road and used a tripod and our 100-400mm lens (extended to 340mm) to capture this image. 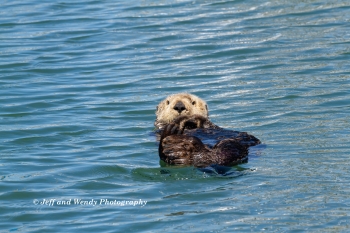 What not to do: disturbing rest

Sea otters at rest are especially impacted by human disturbance.We shot this image from our kayak using a 100-400mm lens that was extended to 300mm. We were caught up in the “cuteness” of this resting sea otter, whose fur was dry and fluffy. We did not realize that as our kayak drifted a little bit closer we caused her to dive and move away from us. You can see the motion of her tail as she uses it to propel herself away from us. 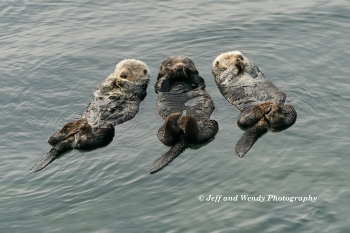 What to do: avoid disturbance by shooting from shore

There are a number of great places to observe and photograph sea otters from shore without disturbing them. We took this photo of a raft of females peacefully sleeping in a harbor from a public walkway. As long as observers are quiet and blend in with the crowd (e.g. don't climb down on rocks or docks at water level), they can often go unnoticed by harbor sea otters. 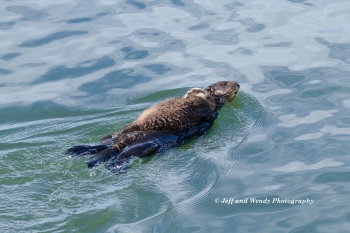 What not to do: harass mothers with pups

We dug a little deeper and found this image taken our 100-400mm lens at 130 mm in 2015. The entire incident was upsetting because a group of people were yelling at this mother otter and chasing her along the walkway behind the restaurant off of highway 1 near Elkhorn Slough. We were already on the deck photographing pelicans when this poor mom and pup came zipping by. Even if we didn't cause the disturbance, we would need to carefully caption this photo to distinguish it as a product of disturbance. 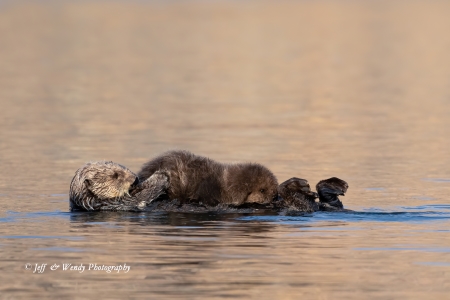 What to do: respect mothers with pups

Here we captured a quiet moment between a sea otter mother and her nursing pup. This image was shot from our kayak with a 100-400mm lens extended to 300mm and approximately 60 feet from the otter. This image was tightly cropped. Clearly our presence did not interfere with this pup nursing and mom catching some much-needed rest. 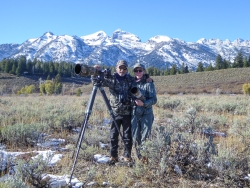 “Promoting respect and awareness for wildlife through the lens of a camera.”

Jeff and Wendy are passionate about preserving all things wild and through the medium of photography strive to capture images that tell a story and evoke emotion. Photography has allowed them to gain a more intimate perspective on wildlife while viewing them through the lens of a camera. They have spent over 40 years and thousands of hours observing and photographing animals-always waiting to capture that perfect light! All of the animals in their photographs are taken in their natural habitat; they do not bait nor risk compromising the welfare of an animal just to capture an image.

They use their photography as a voice for wildlife and conservation issues. They devote time educating people about the animals they photograph through their website, social media and photography classes. Wildlife photography inspires them to travel and dedicate time researching the subjects they want to shoot and the conservation issues they have a desire to support. Jeff’s degree is in Fine Arts, so painting and drawing are an ongoing passion. Wendy has a Master’s in Educational Leadership, but their passion for wildlife photography has been a unifying force.

They have volunteered at Lindsay Wildlife Experience since 1985 and also volunteer for the Least Tern Project.  Each year they donate a percentage of the proceeds from their annual wildlife calendar to Lindsay Wildlife Hospital and other non-profit organizations such as the River Otter Ecology Project. Their work can be seen at 4th Street Fine Art in Berkeley, California.

Jeff and Wendy want their images to promote an awareness and respect for all wildlife and provide people with an image that reminds them of the importance of connecting with nature on an emotional level. Follow them on Instagram or visit their website to see more of their wildlife photos.