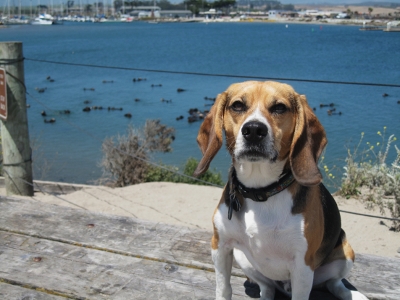 Harry, the sea otter savvy beagle says, keep your pet and sea otters safe. Prevent interactions!
Take some advice from the world's most sea otter savvy beagle, Harry: NEVER allow your dog to chase, harass, or interact with a sea otter!
A sea otter is capable of harming and even killing your pet.
Interactions between pets and wild animals are often interpreted as play, a term to which we often apply a human perspective. "Play" between a dog and a sea otter has been known to result in fatality to the pet. 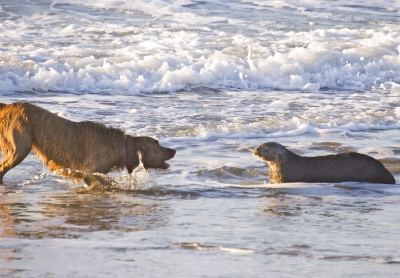 This dog is at risk of injury and is preventing this sea otter from coming ashore
If you allow your dog to interact with a sea otter you:
Sea otters that cause injury or death to pets may end up being removed from the wild population.
Diseases that can be transmitted from your dog to a sea otter include canine distemper and rabies; diseases that may be transmitted from a sea otter to your dog include Salmonella, Streptococcus phocae, and possibly leptospirosis. Don't risk it!
Pet owners should immediately recall and restrain any pet approaching a sea otter.
Bystanders should also take action to discourage such interactions: encourage the owner to restrain their pet and remind them they are breaking the law.
Don't encourage this behavior by promoting videos and photos  depicting interactions between pets and sea otters as "cute" on social media.
Be sea otter savvy with your pet! 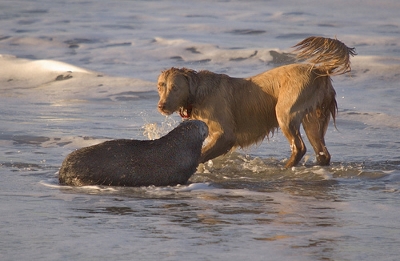 What seems to be harmless play, can result in injury or death to pet or sea otter
Background photo by Joe Planko
Copyright © 2021 Sea Otter Savvy. All Rights Reserved.
Website By: Tree Top Web Design