After facing near extinction due to the maritime fur trade of the 18th and 19th centuries, sea otters were first given protection from hunting by the Northern Pacific Fur Seal Treaty,  signed by the United States, Great Britain (also representing Canada), Japan, and Russia in 1911. Since then they have gained further protection in the United States under the Marine Mammal Protection Act of 1972, with populations in California and Southwest Alaska listed as threatened under the Endangered Species Act.

Wherever you may encounter sea otters, they are protected from hunting and harassment by federal, state, and sometimes local laws. Those violating these protections are subject to fines, citations, and/or incarceration. In some instances, disturbance to sea otters may constitute harassment and may be defined as "take" under these laws, even if unintentional. See below for a list of the laws protecting sea otters from harassment in California. 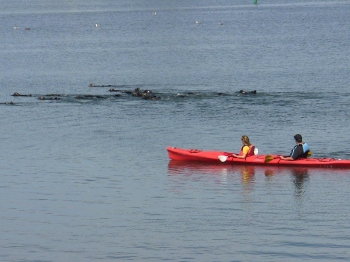 Disturbance to behavior patterns of sea otters is considered harassment under federal, state and local laws.

It is unlawful to “take” any threatened or endangered species.  Take includes harassment.  Harassment is defined as an intentional or negligent act or omission which creates the likelihood of injury to wildlife by annoying it to such an extent as to significantly disrupt normal behavior patterns which include, but are not limited to, breeding, feeding, or sheltering.

No person shall use an aircraft (including drones) to harass any wildlife.  This law has been applied in cases of aircraft disturbing nesting seabirds.

It is unlawful to “take” any marine mammal.  Take includes harassment.  Harassment is defined as any act of pursuit, torment, or annoyance which has the potential to injure (Level A) or disturb by causing disruption of behavioral patterns (Level B) a marine mammal or marine mammal stock in the wild.

It is unlawful to “take” any marine mammal, sea turtle, or bird within or above the Sanctuary.  Definition of take (90 CFR 922.3) includes “harass, hunt, capture, kill, collect or injure, or to attempt to engage in any such conduct.”  This includes but is not limited to “…to operate a vessel or aircraft or to do any other act that results in the disturbance or molestation of any marine mammal, sea turtle or seabird.”  Operation of aircraft under 1,000 feet is presumed to cause take.

It is unlawful to harass, herd or drive any game or non-game bird or mammal or furbearing mammal.  For the purposes of this section, harass is defined as an intentional act which disrupts an animal's normal behavior patterns, which includes, but is not limited to, breeding, feeding or sheltering.

It is unlawful within a State Park to molest, hunt, disturb, harm, feed, touch, tease, or spotlight any kind of animal or fish or so attempt.

It is unlawful to fly any aircraft to fly less than 3,000 ft. over the Sespe Condor Sanctuary, and less than 1,000 ft. over the Año Nuevo State Reserve, The Farallon Islands Game Refuge, the Point Lobos State Reserve, the California Sea Otter Game Refuge, and Anacapa, San Miguel, Santa Barbara, and San Nicolas Islands, except for rescue operations, in cases of any emergency, or for scientific or filmmaking purposes under a permit issued by the department after a review of potential biological impacts.

To report wildlife disturbance issues, please use: https://www.fws.gov/le/contact-us.html. That will put you in contact with the USFWS Office of Law Enforcement department and lists a phone number for quicker responses: 1-844-FWS-TIPS (397-8477). For more information on USFWS law enforcement, go to their law enforcement general web page.

Learn about rules and regulations in California State Parks