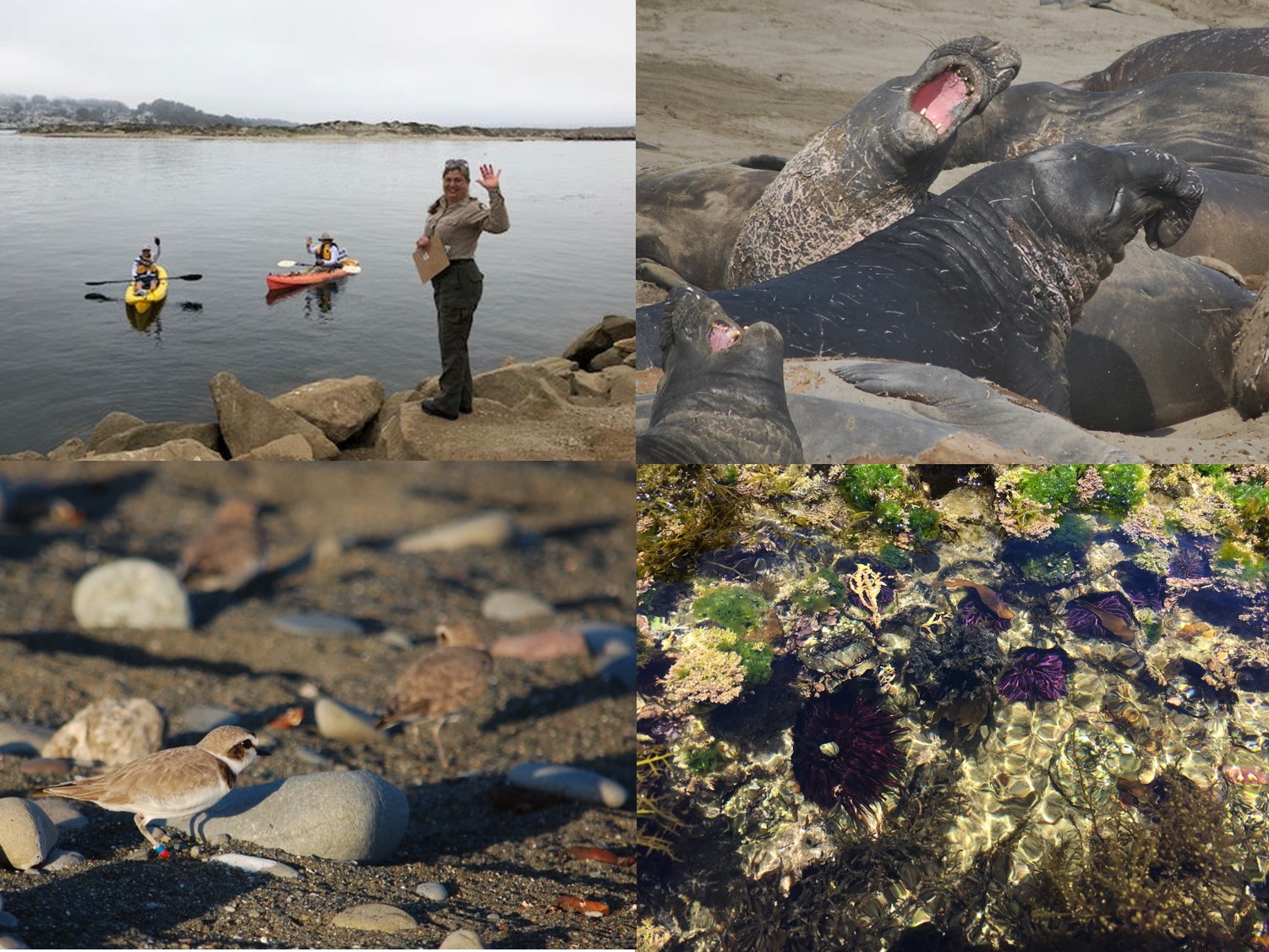 On the 5th of November 2018, wreathed by an enthralling view of the fog-shrouded Monterey Bay, a group of people gathered at the Monterey Bay Aquarium with the common goal of protecting the wildlife of the 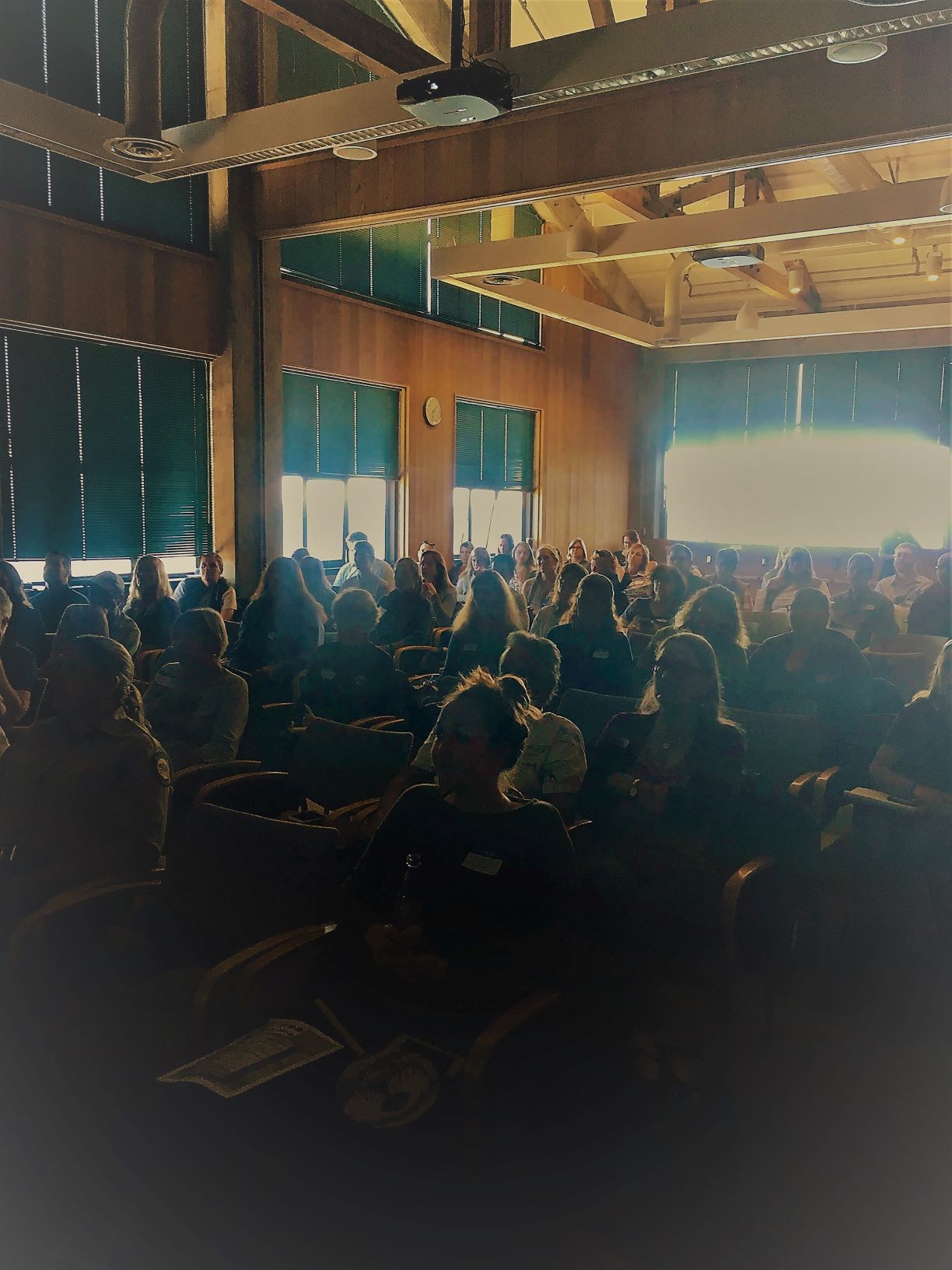 Attendees of the 2018 Symposium fill the room at the Monterey Bay AquariumCalifornia coast and beyond. The participants at the 4th Annual Central California Coastal Wildlife Disturbance Symposium came to hear presentations from 19 different speakers describing wildlife disturbance issues and ideas for solutions. They came to participate in problem-solving groups to brainstorm solutions to real-life human-wildlife conflict scenarios.  They came to meet others from government agencies, non-profit organizations, and local businesses to find common ground, common goals and ways to work together to foster awareness and stewardship.

Presenters brought news from up and down the California coast and as far afield as Australia: We learned about the dangers to nesting snowy plovers posed by the activities of human beach goers. Speakers shared their challenges for balancing the needs of humans and wildlife at popular wildlife viewing places like Pt. Reyes National Seashore and Pillar Point Harbor. We heard about tips for flying drones responsibly around wildlife, the road from notion to on-the-ocean for the SeaLife Stewards, collaboration to foster Seabird SAFE pilots, and bringing the message of wildlife stewardship to schools. A productive group discussion tackled the sometimes-controversial minimum safe viewing distance for sea otters. We were given a behind the scenes look at the development of the engaging Sometimes a Long-Distance Relationship is the BEST Relationship campaign created by the National Park Service in collaboration with Colorado State University. The California Academy of Sciences shared how citizens science is helping bring awareness to the fragile life in tidepools.  All who attended left with knowledge buckets full and idea baskets overflowing. 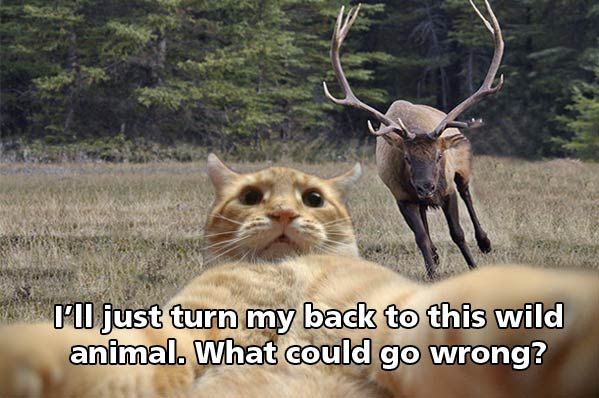 Meme from the National Park Service "Long-distance relationship" campaignBuilding on a seabird-focused Wildlife Disturbance Symposium organized by Seabird Protection Network in 2013, Sea Otter Savvy has partnered with the Seabird Protection Network and California State Parks to organize this wildlife disturbance symposium since 2015. Our goal from the start
has been focused on maximizing the effectiveness of diverse efforts to mitigate human-caused disturbance to coastal wildlife by fostering agreement upon common strategies and messaging, creating a forum for the sharing of new ideas, and supporting collaboration.  After a full day or talks and group activities, attendees were invigorated and inspired to return home with new solutions and connections. With human population steadily on the rise, our wildlife need champions more than ever. In this fight, we are stronger together.

Thank-you to all the heroes who work everyday to promote stewardship. Here are some of the participants working toward peaceful coexistence between humans and wildlife in the 2018 Central California Coastal Wildlife Disturbance Symposium:

Get Savvy at our Sea Otter Awareness Week Viewing Stations 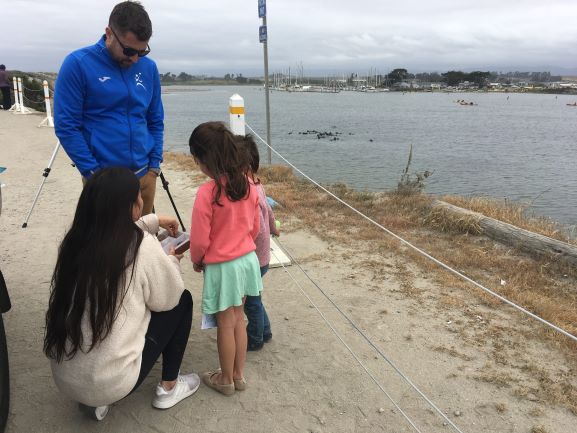 Volunteer shares about sea otters at Jetty Road outreach station in Moss LandinThroughout Sea Otter Awareness Week 2019 (September 22-28) you can meet volunteers from SeaLife Stewards, Sea Otter Savvy, California State Parks, California Department of Fish & Wildlife, Defenders of Wildlife, and the Morro Bay State Park Museum of Natural History to learn about sea otters, experience wild sea otters from the best viewing locations in California. Volunteers will be ready to help you be expert otter spotters with binoculars and spottng scope, answer your sea otter questions, and share how you can help protect sea otters and join the Sea Otter Savvy team! Click on the Sea Otter Awareness Week icons on the map below to find the station nearest you. Each location icon has a photo of the site and hours when volunteers will be present.

How sea otter savvy are you? 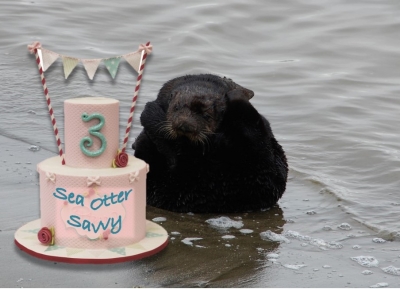 On August 15, 2015 Sea Otter Savvy came to life! Our roots are nourished by our origin within the Southern Sea Otter Research Alliance, including the US Fish and Wildlife Service, the California Department of Fish and Wildlife, the Monterey Bay Aquarium, and Friends of the Sea Otter. Those agencies and organizations that provided the initial boost we needed continue their support today and we have made many new friends and partners! Today we celebrate our 3rd birthday and share with you our pride in what we've accomplished and our enthusiasm for the future!

Here are some of the highlights from our last three years: 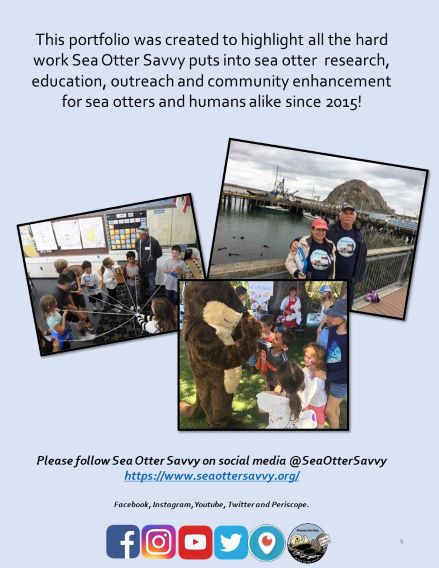 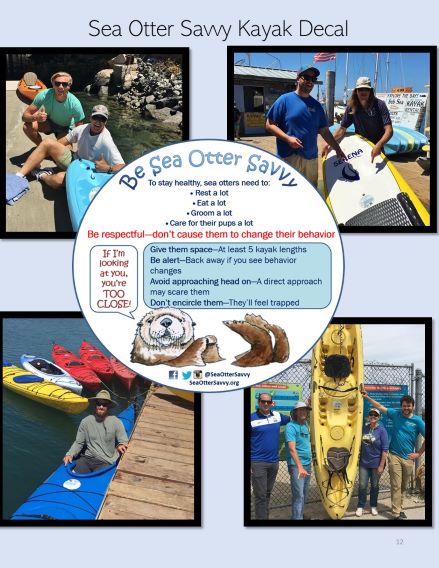 Sea Otter Savvy teamed up with Eyes on Conservation and Wild Lens to create an informational video to help educate coastal visitors on the etiquette of Sharing Space with Sea Otters.

Sea Otter Savvy partnered with Wild Lens, Eyes on Conservation and the conservation musicians the Whizpops to create a fun animated music video that educates about sea otter natural history and how humans should respect this protected marine mammal. 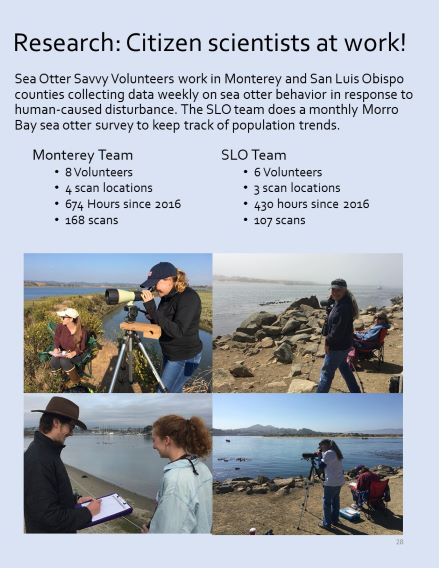 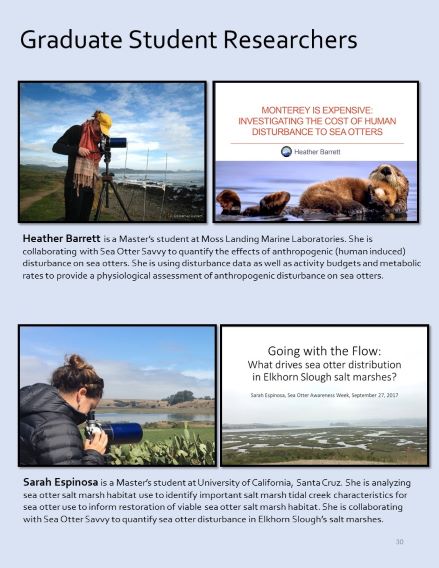 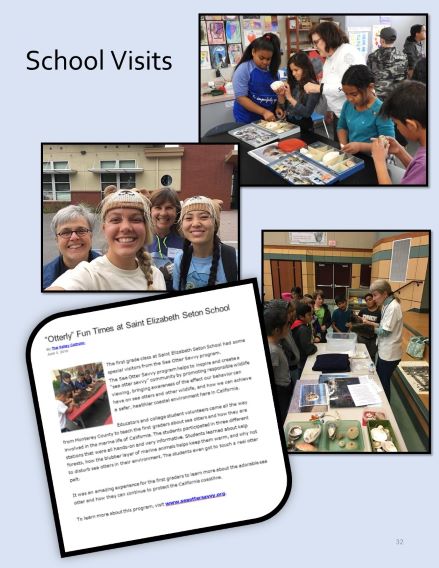 Learn how you can become part of the Sea Otter Savvy in the Classroom team! 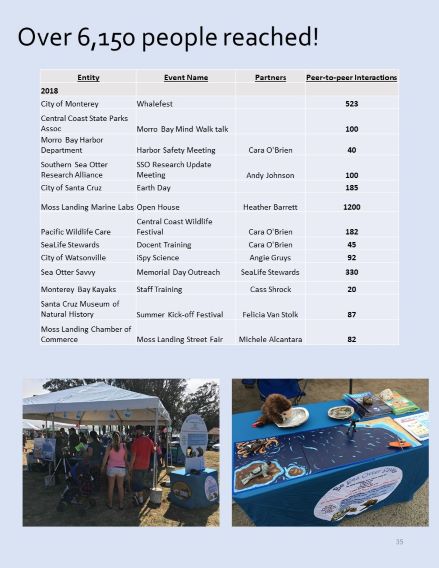 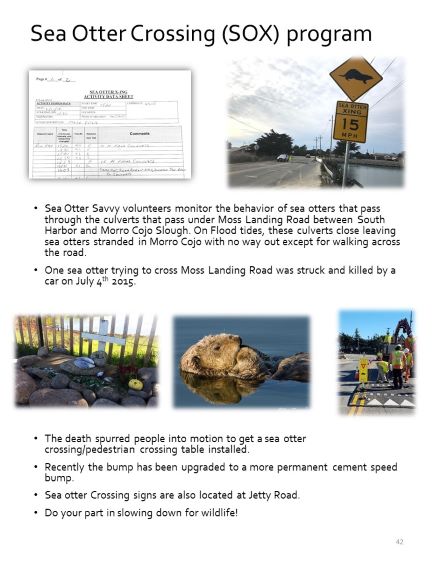 Learn more about how and why sea otters are at risk on coastal roads. 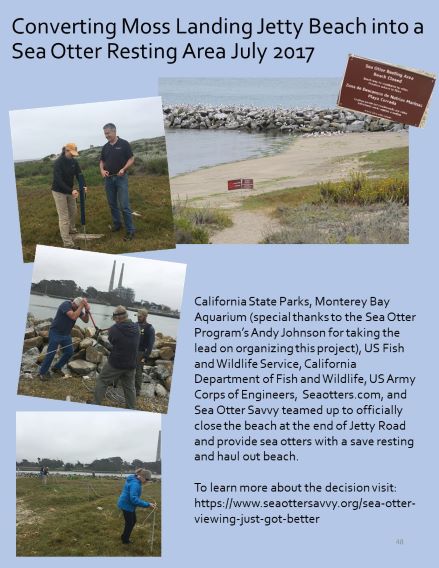 Learn how a diverse group worked together to safeguard a tiny beach in Moss Landing for shore-napping sea otters (and many other species). 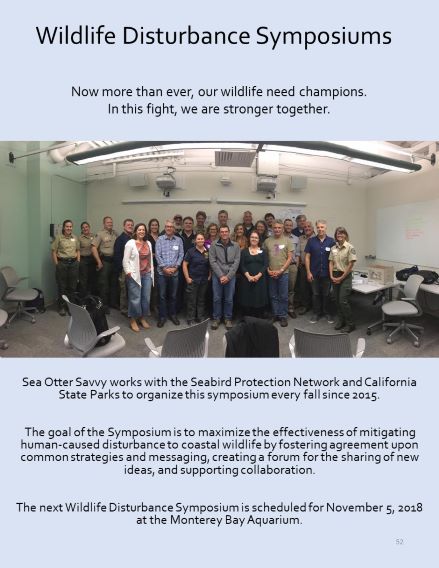 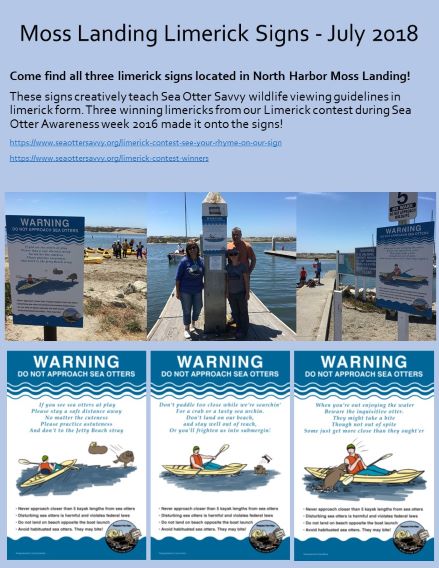 Are you a rhyme-smith? Keep an eye out for 2019's limerick contest! Read more about our 2017 contest.

These beautiful AND educational panels will be going up soon! 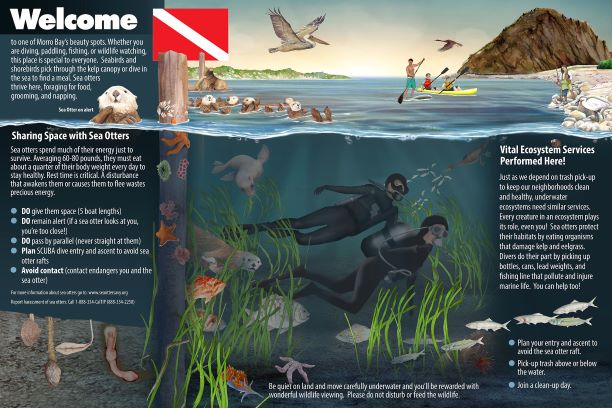 Sea Otter Savvy is more than just our staff and volunteers! We are all the organizations, agencies, businesses, and individuals who work together to protect our wildlife neighbors. Together we are making California's Central Coast a place where everyone can observe and enjoy wildlife respectfully and responsibly. We at Sea Otter Savvy are looking forward to many more years! 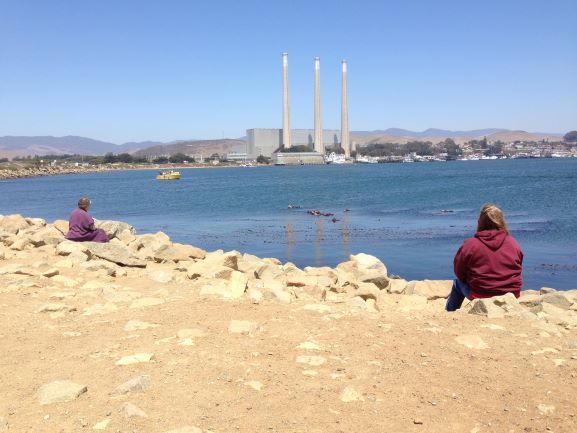 Sea Otters on the Island of Blue Dolphins, Part 2 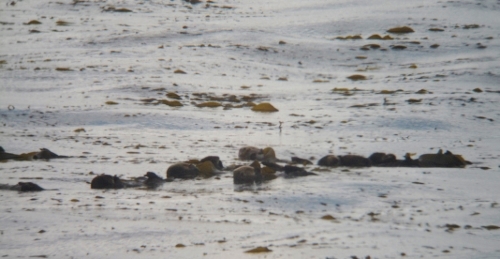 A rare photo of a raft of sea otters at the remote San Nicolas Island, CA

Read Part 1 of this series. 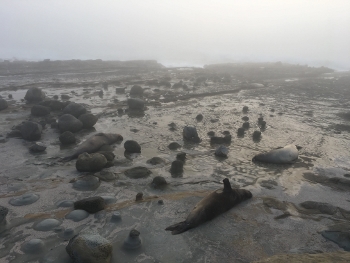 Fog blankets the shore and sleepy elephant seals at San Nicolas IslandThe San Nicolas Island sea otter research team drives down the winding road to the beach aptly called Rock Crusher to take a first look for sea otters. Rock Crusher, at the southwest end of the island, is known for pounding surf, otherworldly rock formations, northern elephant seals and the most likely place to find the sea otters of San Nicolas. The kelp beds here can extend from shore out 2 kilometers, forming optimal habitat for a growing sea otter population. On this first day of our survey, however, few of those features are visible in the dense fog that rests heavily on the water. The winds have calmed, the air is still, and the marine layer settles in. Only the closest rocks and resting elephant seals are visible. Beyond that, all fades to pearly grey. For today, San Nicolas will keep his secrets hidden in the mist. 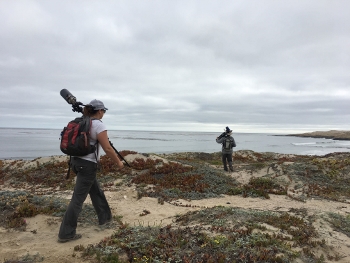 San Nicolas Island sea otter counters hit the trails with their Questar telescopesAfter a good night’s sleep, we are all up at dawn to check the weather and plan for the day. From our quarters on an island plateau a wispy crown of fog is visible, hinting that viewing may still be obscured. The oversight of the San Nicolas Island sea otter census has been the responsibility of Brian Hatfield of the US Geological Survey Western Ecological Research Center for 30 years. As expected, he assigns each team member a section of the rugged coastline, dividing the island neatly into uneven quarters: the southeast side, the southwest side, the north side, and the offshore reef known as The Boilers. San Nicolas Island is the second smallest of the Channel Islands at only 8 km from west to east tip of its leaf shape. Each hiker must search meticulously for sea otters in their section and mark them on a map. Despite the wisps of fog, the team is excited to hit the trails in search of otters. 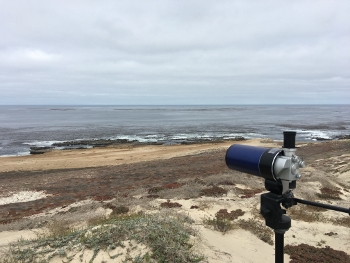 Questar telescope pointed at The Boilers kelp bed in the distanceMy assigned section is The Boilers which is notorious among the sea otter biologists coming to the island. This shallow rocky outcrop rises 3.5 km (2.2 mi) from the island’s southwest tip, providing a foothold for a vast bed of giant kelp, Macrocystis pyrifera, and habitat for a myriad of other species including sea otters. Surveyors assigned to this location must have expert “otter spotting” skills to not only spot, but count, sea otters as distant as 4 km (2.5 mi). Our most trusted tool for accomplishing this is the Questar telescope---not a standard spotting scope but a true telescope designed for looking at celestial, rather than mustelidal bodies.

As I reach my hilltop vantage point east of the Boilers, I can see I am in a race for visibility against the fog, and the fog has a head start. Within minutes, any chance of spotting sea otters in the kelp bed is lost in a dense fog bank riding the wind to shore. For the two hours I must wait for the fog to clear, I at least have the soundtrack of the barking sea lions, croaking elephant seal bulls, and breaking surf to keep me company. At last, under the heat of the noon sun, the fog recedes, and the kelp of The Boilers reef rolls out before my scope like a vast carpet.

Slowing panning the scope from the east end of the kelp bed to the other, my eye seeks the tiny search image of a sea otter, dark against the kelp—where there is one, there are often others---two, three, eight, twelve in raft—I find four rafts and several single otters. By the end of my day I have counted over 40 adult sea otters with 5 pups at The Boilers. After meeting up with my teammates, I discover that my section contained half of the total number of sea otters counted that day. Only once since the translocation occurred in the late 1980s, has the total count of sea otters at San Nicolas Island topped 100. Today, it will be fewer. 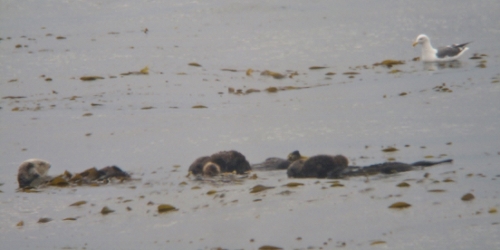 Sea otter moms and pups with a territorial male at San Nicolas IslandThe sea otters at San Nicolas Island seem to thrive. They find high-calorie prey abundant and easily acquired. Vast beds of giant kelp encircle the island, offering habitat for prey, shelter from predators, and security for pups. The crowds of mainland Southern California are 100 miles away. Understanding why populations thrive or decline is rarely simple, and even arriving at a sound theory can be a bit like putting together a 500-piece puzzle. We expect the San Nicolas sea otter population to expand to fill the available habitat and yet, 30 years after the translocation, the otters have not approached the island’s carrying capacity.

Because their metabolism (and thus, their appetite) runs so high, one key piece of the puzzle for sea otter populations everywhere is prey. What is available and abundant in the habitat and what are the otters selecting to eat? For this reason, an important goal of these quarterly expeditions is the acquisition of foraging data, much the same as it was during my thesis work in 2003. Team members visually locate foraging sea otters and, with the help of our trusty Questars, follow them for as long as possible to identify, count, and estimate size of prey. As a comparison point, we know what they were eating back in 2003 (see Part 1). Has that changed? Are the big, calorie-rich red urchins still a mainstay? How does that relate to changes we see in the habitat itself? With urchin barrens on the rise on the mainland of California, the otters of San Nicolas Island may help scientists unlock deeper mysteries of the relationship between sea otters and their sea urchin prey.  Look for Part 3 of Sea Otters at the Island of the Blue Dolphins to learn more about the interwoven stories of the sea otters, urchins, and kelp of coastal California. 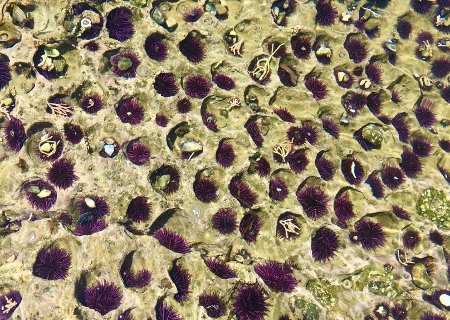 Purple urchins (Strongylocentrotus purpuratus) in a San Nicolas Island tidepool. Urchins slowly grind their own caves in the sandstone.

All photos by Gena Bentall