One Shot Ends a Life 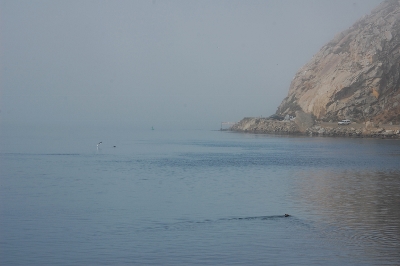 Sea otters forage peacefully in the shadow of Morro Rock

This was supposed to be a story with a happy ending. In September of 2016, the community of Morro Bay was working together to assist with the rescue of a female sea otter that had been spotted in the bay with gaping wounds caused by entanglement with fishing line. The wounds were so obvious they could be seen from shore, kayak, or boat, and alerts were coming in to Morro Bay’s resident sea otter biologist, Mike Harris, of the California Department of Fish and Wildlife. Harris had put the word out to locals who were on or near the water to keep an eye out and report sightings to him, so he could make an attempt to capture her and bring in for treatment. After several failed attempts at capture, the word about the injured sea otter had spread throughout the community and reports streamed in from local standup 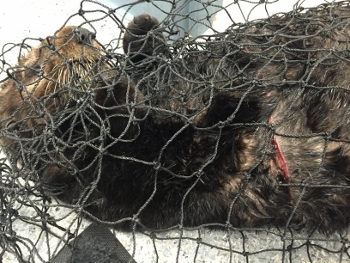 Wounds from fishing line entanglement are visible on 741 following her capture for treatment. Photo by Mike Harrispaddleboard shops, volunteers from the local kayak-based SeaLife Stewards team, and private citizens. Finally, on September 12, Harris was alerted that the sea otter was spotted in open water inside the harbor. Transported to the location on one of the Morro Bay Harbor Patrol vessels, he was able to safely net her. Harris took the young female otter to the Marine Mammal Center, where veterinarian Dr. Heather Harris noted multiple wounds where the line cut deeply into the skin. After initial treatment, she was transported to the Monterey Bay Aquarium for further care. It is unlikely she would have survived these wounds without intervention.

Following more than 18 weeks of intensive care at the Aquarium (where she was known as otter 741), she was given brightly colored flipper tags to help spotters identify her at a distance, and declared healthy enough for release. On December 2, 2016, Mike Harris, and participants from the Marine Mammal Center and the Monterey Bay Aquarium, released 741 back to her home waters of Morro Bay. It was a moment to celebrate, not just one sea otter's recovery and freedom, but the valor of so many who helped her.

741 was sighted resting in a common sea otter rafting spot in the bay near the base of Morro Rock for about a week after release. While Harris and local volunteers looked for her daily, she was not spotted again after that first week. Harris suspects she was there all along but had chewed off the plastic identifying tags on her hind flippers, and so became just one among those rafted in the kelp.

The participation of the community of Morro Bay in the rescue and rehabilitation of this sea otter, so grievously injured by the garbage we leave in our wake, was symbolic of a gentle tip of the scale of attitudes towards sea otters that has happened over the last decade in this small coastal town. Historically a thriving fishing community, Morro Bay has long had a segment of residents that actively revile sea otters as plunderers of coastal species and destroyers of fisheries. In recent years, the power of a healthy sea otter population to draw tourists to the bay has begun to turn the tide, and the city has embraced their presence in the harbor. Sea Otter Awareness Week has been declared and celebrated for two years running. The devotion of local volunteers with organizations like SeaLife Stewards, Sea Otter Experience, Sea Otter Savvy, and the Marine Mammal Center who give their time to promote sea otter awareness and conservation is truly inspiring.

While the balance of community opinion may have shifted in favor of sea otters, some still harbor anger, resentment, and hatred---perpetuating false claims of ecosystem 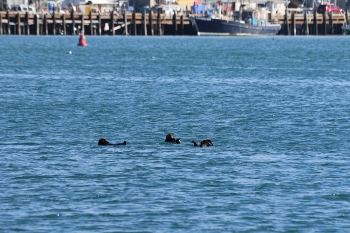 741 (center) rafted with some of Morro Bay's sea otters following her rehabilitation and release. Photo by Mike Harrisdevastation and advocating for the persistence of a handful of fisheries over the rightful presence of sea otters in the waters from which they were once nearly extirpated.

I don’t know if it was this hatred or some other motivation that resulted in the tragic end to what was once an inspiring conservation story. On September 12, 2017, otter 741 was found floating dead in the waters of Morro Bay. Examination of her body revealed that she had died recently—within 12 hours or less— and had suffered a fatal pellet gun shot to the head. The location of the pellet in the back of her head, was consistent with a shot to to resting otter, as they typically sleep on their back, chin resting on their chest, with the back of their neck exposed. Given the fresh condition of her body, the incoming tides, and the location where she was found, Harris thinks it is possible she was resting peacefully in the kelp bed by Target Rock near the entrance to the harbor—perhaps among other sea otters— when she was shot. A female sea otter, who had been given a new lease on life through the intervention of humans, was now robbed of a life in the sea foraging for crabs, sleeping wrapped in kelp, and rearing the future generations of sea otters. This is the second sea otter killed by a pellet gun in the Morro Bay area in the last decade, with another gunshot otter recovered on Morro Strand in 2010. That crime has never been solved. Are the two incidents are related?

The monstrous murder of this sea otter begs for justice. I urge all the community members of Morro Bay who are part of that “turn of the tide” towards sea otter awareness and appreciation to be vigilant for clues that may lead to the arrest and conviction of the perpetrator. The shooting occurred either early on the morning of September 12 or late the night before. The weapon was a pellet gun or air rifle, weapons which are becoming increasingly powerful. Have you overheard someone bragging about the shooting? Did you witness any suspicious behavior at that time?  If you have any information that may help solve this case, please call CalTIP at 888-334-2258 or via the CalTIP app.

Despite this tragedy, I have faith that our California communities are rich with people who respect their wildlife neighbors, give them voices when they need advocates, and aspire to a coastal community where predators like sea otters are valued and welcomed. I have no doubt where the tide is turning. 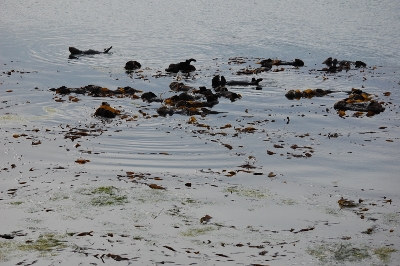