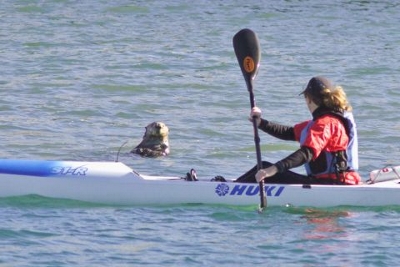 The southern sea otter is protected under federal laws as both a marine mammal and a threatened species. Sea otters don’t have a blubber layer like seals and must consume up to one quarter of their body weight a day to stay warm in the frigid waters of central California. When they’re not feeding to maintain their high metabolism, they are sleeping to recharge from all the hard work of foraging. These critical life patterns are easily disrupted by human presence. In popular recreation areas, such disturbances can occur repeatedly throughout the day.

Just as repeated interruption of a person’s sleep and meals day-after-day can lead to increased stress and sickness in humans, it has the same effect on sea otters. But unlike humans, sea otters live on a narrow margin of survival in harsh ocean conditions. Your interruption of sea otters’ routines—compounded by disturbance from other sources—can lead to severe fatigue, malnourishment, physiological stress, a weakened immune system, disease, and finally death. But anxious spectators will never see their part in this tragic sequence of events. They will simply be satisfied that they captured the close-up photos they wanted for their scrapbook or social media page. The otter they leave behind will have to contend with hundreds more such encounters a month—trying to survive heavy seas, sharks, shifting food resources, pollutants, and disease while being repeatedly pursued by boaters, kayakers, paddle boarders, beachgoers, and now, aerial drones.

For these reasons, the U.S. Government has protected sea otters under several federal laws. That protection includes a prohibition against disturbing sea otters by causing them to change their normal behavior in any way. The simple act of causing a resting otter to turn its face toward you is considered “harassment” under the law.

Many people do things purposely to attract an otter’s attention. They equate an otter’s gaze with that of their pet at home, mistakenly thinking that the otter somehow likes their attention. It does not. It’s actually on high alert, planning its next move should the spectator approach closer. When an otter raises its head up to get a better view, it is not curious or eager to meet the onlooker - it is carefully evaluating what it perceives as “a potential threat”. Its heart rate quickens and its body produces adrenaline that drains valuable energy it needs to survive. If the threat moves away, it takes an otter about 15 minutes to resume what it was doing before the disturbance—just enough time for the next person to come along. If the threat moves closer, then the effects of the disturbance intensify even more.

Sea otter observers should closely watch otter reactions as they approach otters from a distance. Observers should begin focusing on an otter’s behavior when 50 yards away. Observers should NEVER surround an otter or approach an otter by paddling or walking directly toward the animal. Instead, they should choose a diagonal path to the side of the animal. If at any time an otter turns its face toward observers, they should immediately stop, approach no closer, and may need to move further away. Even if otters don’t react to observer presence, observers should NEVER approach otters closer than 50 feet.
Remember: “Be on guard at 50 yards, and do not sneak past 50 feet.”

If you witness sea otter disturbance in Monterey Bay National Marine Sanctuary that you think should be reported, you can help by collecting as much detailed information about the incident and people causing the disturbance as possible. If you can quietly capture video or photos of the disturbance without alerting the person(s) causing the disturbance, such records can be very helpful to subsequent enforcement efforts. You can report marine mammal disturbance incidents to the NOAA Enforcement Hotline anytime at 1-800-853-1964. But it’s best to report problems as soon as possible. The sanctuary’s website offers helpful reporting contacts and reporting tips. 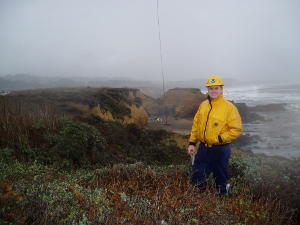 Scott Kathey at work in the Monterey Bay National Marine SanctuaryFederal penalties for harassing sea otters can range from hundreds of dollars in fines to criminal prosecution, depending on the circumstances. But random enforcement actions can’t repair the avoidable and unnecessary damage caused by many people. It’s critical that the public help protect these magnificent wild animals by voluntarily watching them from a respectful distance and allowing them room to survive and thrive.