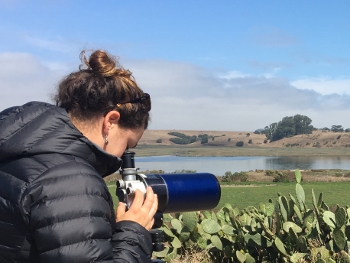 I love maps. I love seeing how far animals travel and conducting spatial analyses to determine critical habitats for a given species. I graduated from Bowdoin College with a BA in Biology and a French minor and I have a certificate in GISscience from Oregon State University. I am currently a second year masters student in the Tinker-Estes Lab in the Ecology and Evolutionary Biology department at the University of California, Santa Cruz.

For my masters thesis, I will be focusing on sea otter salt marsh habitat use in Elkhorn Slough, CA. Current research has shown that sea otters indirectly enhance the ecosystem services provided by the salt marsh. Sea otters promote the growth of pickleweed (Salicornia virginica) by suppressing the abundance of shore crab (Pachygrapsus Crassipes) predation on pickleweed. Salt marsh vegetation has been shown to enhance the efficiency and productivity of salt marsh (Kearney and Fagherazzi 2016). Also, sea otters tend to use the different salt marshes in Elkhorn Slough to varying degrees. Because of this, the purpose of my project will be to determine the important variables that influence sea otter distribution and habitat use in the Elkhorn Slough salt marshes. I will be using GIS to conduct a spatial analysis to measure the geomorphology and topology (channel width, length, depth, bank slope, efficiency) of the tidal creek networks in the slough. I will also be quantifying sea otter prey and human use/disturbance in each tidal creek network. A map of the salt marsh networks can be seen in Figure 1. I am working with Sea Otter Savvy to conduct scan sampling surveys to quantify marine recreation in each salt marsh in Elkhorn Slough. Yampah tidal creeks will act as the control site because they are managed by Elkhorn Slough National Estuarian Research Reserve and are off limits to marine recreation. The results from this study will be used to inform the management (restoration and creation) and conservation of salt marsh tidal creek networks in Elkhorn Slough and identify important salt marsh habitats in other Californian estuaries.