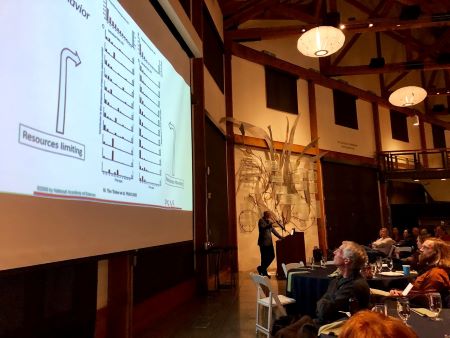 The biennial Sea Otter Conservation Workshop, hosted by the Seattle Aquarium, has become the hottest scene for biologists, zookeepers and aquarists, advocates, and government specialists working with or interested in sea otters.

This year, the seats were filled each of the three days of the workshop with attendees eager to hear the latest information on sea otter ecology, conservation, physiology, husbandry, population status, genetics, and veterinary themes. In the evening, guests were treated to a dinner with a Window on Washington Waters and a view of the sea life of Puget Sound as a backdrop. The keynote address was delivered by the esteemed Dr. James Estes who spoke about the last 50 Years of Sea Otters and Coastal Ecosystems: History and Highpoints.

Over three days, with more than 50 speakers from California to Japan, there was something for even the most seasoned sea otter biologist to learn. Sea Otter Savvy was represented by two talks, one by Moss Landing Marine Laboratories' graduate student, Heather Barrett, who summarized the results of her project Investigating the energetic cost of anthropogenic disturbance on the southern sea otter, which is based on data collected by our citizen science team. During the Conservation session, I summarizing the Sea Otter Savvy program accomplishments. There were many exceptional talks, but here are my top 5 in no particular order: 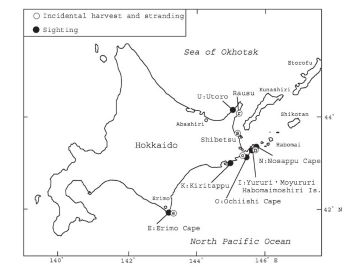 It was great to hear an update on the little studied sea otters of Japan. Yoko Mitani, of the Field Science Center for Northern Biosphere, Hokkaido University, shared the newest information about the distribution and foraging behavior of sea otters off Hokkaido’s eastern coast. This small pollution is expected to expand, and Yoko predicted conflicts with local fisheries as is consistent with most sea otter recovery stories. 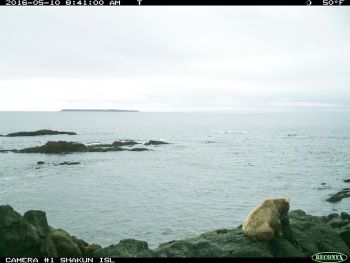 Until I heard this talk by long-time Alaska sea otter biologist, Dan Monson, of the U.S. Geological Survey, Alaska Science Center in Anchorage, I had no idea that brown bears were predators of sea otters! Dan showed us some amazing trail-cam photos showing brown bears stalking and killing hauled out sea otters (and harbor seals) in the Katmai National Park and Preserve in Alaska. While sea otters are voracious predators, they are not always at the top of the food chain! 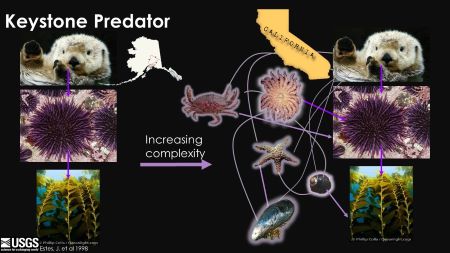 The keystone predator paradigm of sea otters, kelp, and urchins was formed based on observations in Alaska. Moving south into california, a more temperate region, the sea otter keystone predator paradigm becomes more complex because of additional contributors to the ecosystem and their expanded role in warmer waters. Graphic courtesy S. Lyon, USGS3. Revisiting the role of southern sea otters in California kelp forest.

I had been eagerly awaiting this talk by Sophia Lyon, of the U.S. Geological Survey, Western Ecological Research Center, Santa Cruz Field Station in anticipation of getting a sneak peak at early returns on the large-scale, multi-faceted NSF study looking at interactions between sea otters, urchins and kelp forests in the wake of the sea star die-off due to wasting disease. Long-story short: California kelp ecosystems are complex, with an array of species filling each functional role. The loss of the urchin-eating sea star, Pychnopodia, from large areas of the west coast, while devastating, has taught ecologists much about the teamwork of kelp forest predators, and there is still much to learn and discover. Sea otters are still important players in the game, but they are one on a team of all-stars keeping the kelp forest stable, diverse, and healthy. 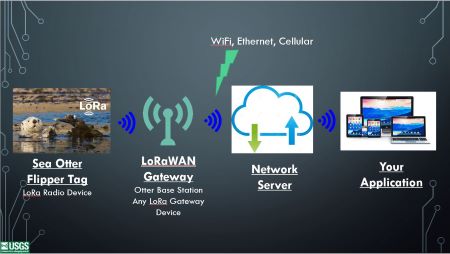 The direction of research and development of new sea otter tagging technology aims to minimize impact to sea otters while also maximizing the efficiency of data collection. Engineers at NASA have teamed up with USGS and the Monterey Bay Aquarium to create flipper tag tech so super-secret, I cannot share pictures of the tags (or I’d have to kill you). Joseph Tomoleoni, from the U.S. Geological Survey, Western Ecological Research Center, Santa Cruz Field Station, was able to share how these “smart” tags would collect novel and improved data, while also being affordable and less intrusive to sea otters. When I said, “Give sea otters space”, NASA answered the call! 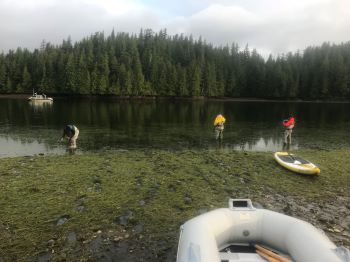 Ginny Eckert, from the University of Alaska Fairbanks, described the complex interactions of sea otters, coastal ecosystems, and fisheries in a place where the sea otter population has recovered to over 25,000 animals. This is a story nearing its climax, with the economic interests of humans coming face to face with the recovery of an ecological superpower, one who had been eliminated from southeast Alaska by another economic endeavor---the maritime fur trade. Sea otter effects on the productive and carbon-sequestering eelgrass beds of SE Alaska are currently described as mixed and complex, and this talk left me wondering and wishing for the chance to give this system time to find its sweet spot with the return of a predator that fed near its shores for millennia.

For those who aspire to reach the upper tiers of sea otter savviness, there were many more interesting talks. You can view the proceedings and read the abstracts here.

Gena Bentall is the founder and Program Coordinator of Sea Otter Savvy and has been a sea otter biologist since 2001.