Sea Otters on the Island of Blue Dolphins, Part 1 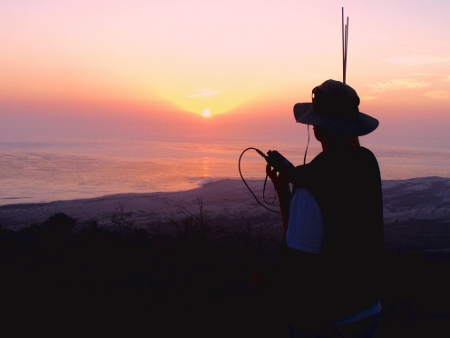 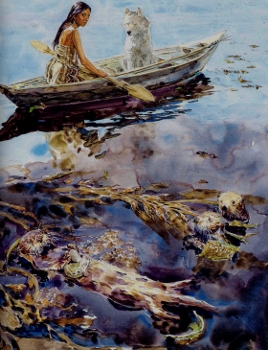 My roots run deeply on the island of San Nicolas. It first entered my heart when I was a young girl, curled up with the story of Karana, the heroine of Scott O’Dell’s Island of the Blue Dolphins. The story is based on a real Nicoleño woman who was left alone on San Nicolas Island when the rest of her people were moved to the mainland in 1835. She lived alone on the island until her discovery in 1853. 150 years later in 2003, I embarked on my with San Nicolas Island love affair when I began my graduate research project on her shores. Every one of my footsteps on the dunes, cliffs, and beaches of the island have since resonated with the spirit of the Lone Woman of San Nicolas. San Nicolas Island (friends can call her San Nic) is an important part of the story of sea otter recovery from near extinction in California. The most remote of Southern California’s Channel Islands, San Nic offers seemingly ideal habitat for sea otters and lies within the species’ historic range. In the late 1980s it was selected as a site for establishing a “buffer” population of sea otters—a recovery wellspring from which to replenish the mainland should an oil spill devastate the sea otter population there. From 1987 to 1990 sea otters were translocated from the central California mainland to San Nicolas Island. After an initial post-translocation “settling” period during which numbers dropped to minimum level, the San Nic sea otter population has continued to grow. 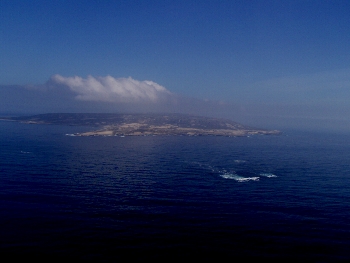 Aerial view of San Nicolas IslandToday, 30 years after the translocation, as our research team disembarks at the San Nic air terminal, the sea otter population at San Nicolas Island persists but remains well below carrying capacity. Our team is composed of Brian Hatfield, the biologist with the U.S. Geological Survey Western Ecological Research Center (USGS-WERC) who has been leading sea otter surveys at San Nicolas for most of those 30 years, Lilian Carswell, Southern Sea Otter Recovery Coordinator for the U.S. Fish and Wildlife Service, Joe Tomoleoni, sea otter biologist with USGS-WERC, Claudia Makeyev, Environmental Protection Specialist with the US Navy (San Nic is currently an Outlying Landing Field for the Navy), and me, alumnus of San Nic. We are here to count sea otters on the Island of the Blue Dolphins. 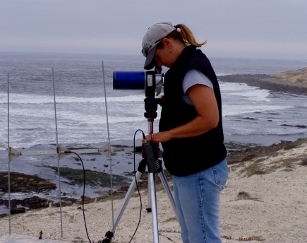 The author monitoring tagged sea otters at San Nic with scope and antenna in 2005For a year back in 2003, I spent most of my days on San Nic. Most of the hours of each of those days was spent in search of sea otters that had been tagged with brightly colored flipper tags and radio transmitters. I followed their most intimate everyday movements and behaviors, so I could study their survival, reproduction, foraging, and movement in the waters around the island. Early each morning, to beat the ever-present afternoon winds, my partner and I would arise with antenna and spotting scope in hopes of watching one of our tagged sea otters as they foraged for prey in vast beds of giant kelp. What I learned during that year, would change our understanding of how sea otters adapt as they recolonized their former range.

The first bold explorers into new habitat focus on abundant, high-calorie favorite prey like urchins. As more otters arrive, and favorite prey become harder to find, sea otters become specialists, with individual otters favoring “suites” of prey that require a similar skill with a tool, or similar skills to find and acquire. As each sea otter settles into a foraging “niche”, fewer are competing directly for food.

A sea otter with red urchins. Photo by Erin Rechsteiner

The sea otters of San Nic, well below the carrying capacity of their island home, ate a diet almost exclusively of large red sea urchins, a species both nutritious and easy to acquire. Their counterparts on the California mainland fell into specialist groups—in a single rocky cove in San Simeon one sea otter may hunt for abalone, while a neighbor smashes small turban snails on a rock anvil. This remote island provided the perfect opportunity to confirm hypotheses about how sea otters respond to increasing competition as their population recovers. 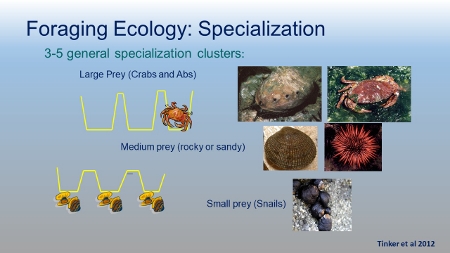 Sea otter foraging specialist types found of the Central CA coast. Tinker et al. 2008
After settling into our quarters our survey team is eager to head to San Nic’s west end, where most of the sea otters are usually found. It is tradition to take a quick “first look” on the eve of the start of the survey, and cheers and pats on the back are routine for the first to spot a raft of sea otters. On this eve, however, the weather had other plans.

The story continues next week in Sea Otters on the Island of Blue Dolphins, Part 2... 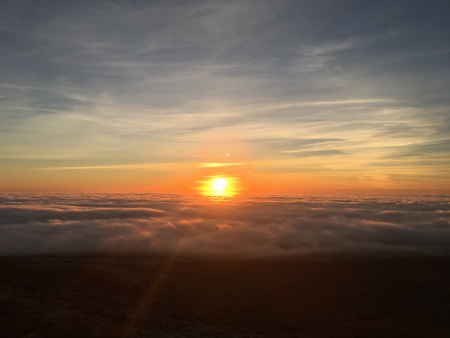