Sea Otters on the Island of Blue Dolphins, Part 3 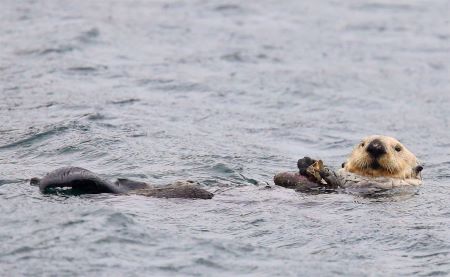 Read Part 1 and Part 2 of this series 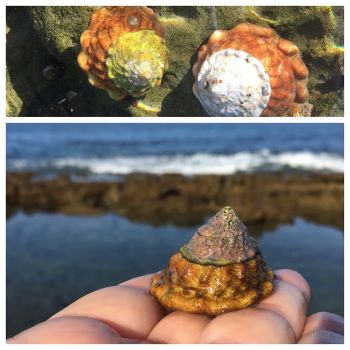 The wavy turban snail, Megastraea undosaPerched on a rocky bluff overlooking the jumbled boulder beach called Rock Crusher on San Nicolas Island, my eye rests steadily on the eyepiece of my Questar telescope, the instrument of choice for sea otter spotters for decades.By the end of the day, I will have a solid red ring the size and shape of the rubber eyecup around my right eye. A female sea otter pops up from a dive, and I quickly click my stopwatch, “Dive time, 35 (seconds)”, I say to my colleague, USGS biologist Joe Tomoleoni, who is recording data at my side.  I flip the scope to high power to zoom in on her prey. With slow gusto, she is hammering a pyramid shaped object on a flat rock on her belly. She rolls over, and the rock is gone, likely stashed in her underarm pocket of loose skin. She now shakes the object like a salt shaker and bites at its base. “She has a wavy turban,” I say, “and she’s shaking it!” Wavy turban snails (Megastaea undosa) are a large marine snail abundant in the kelp forests surrounding the island we call San Nic. She cracks the hard shell on the rock, then shakes the snail out of its fractured home. “It’s a size 2b!” I exclaim, using a handy measuring tool, the mean width of a sea otter’s paw, to estimate size. The female sea otter works on the prey for a minute or so, handing a few bits to her pup who swims over to solicit handouts. Then she dives to search again, “Surface time, one minute, 50 seconds”. This process of watching sea otters dive, forage and eat has been carried out for tens of thousands of dives across decades of study in California. It is the foundation of our understanding of sea otter foraging ecology and their important place in the complex food web of coastal California. For some tagged sea otters along the Monterey Peninsula, the detailed statistics of their forging behavior have been documented for a decade or more, providing an index for exploring how each individual sea otter fits into the complex and dynamic coastal food web. 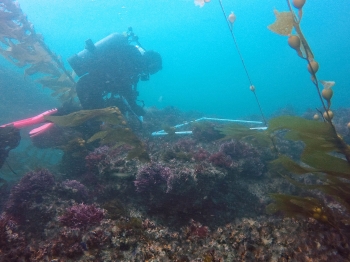 Research diver records species complexity at San Nicolas Island. Photo by Zach RandellThe coastal ecosystems of California do not exist in a static state. They are continuously influenced by a myriad of factors —climate, disease, fishing, pollution —to name just a few. A change in the abundance of one species may have far ranging effects, with the influence of some, the keystone species, packing a greater punch than others (check out this video). San Nicolas Island is a ideal microcosm in which to study the "sea otter effect" on a California kelp ecosystem. As the resident sea otters of San Nic have grown in number since the translocation project of the late 80s, observations of their foraging behavior help scientists understand how sea otters adapt their diet as their density and distribution around the island changes. Complimentary long-term work by scientists studying the species composition at both sub-tidal and intertidal sites around San Nic, documents how those communities change in response to a suite of factors. These long-term studies were started before the first sea otters were translocated to San Nic with the goal of documenting changes in species abundance as the predators re-established and grew in number. Definitive understanding of the factors influencing the kelp forest ecosystem surrounding the island, however, has proved elusive, with a clear “sea otter effect” muted by the effects of disease and changing climate.   When asked about the challenges of studying such a complex ecosystem, Joe Tomoleoni (who, in addition to being a shore-based biologist is also a diver who has worked on the subtidal San Nic team) reflected, “It’s hard enough to figure out California’s kelp forests in a static state, but with so many variables—temperature, currents, disease, harmful algal blooms, primary productivity, fishing, ocean acidification, etc.—all changing all the time, things get pretty messy in a hurry. These communities have lots of moving parts.  Determining a sea otter effect is difficult because we aren’t able to design an experiment that accounts for all possible variables.  We are left simply observing change and using correlations to piece the puzzle together." 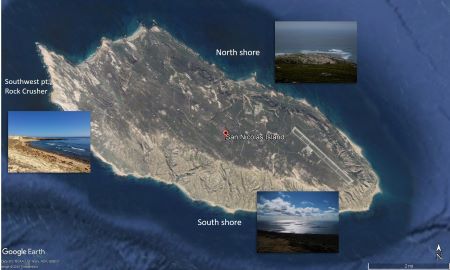 San Nicolas Island, Channel Islands, CaliforniaAfter observing our focal forager for 20 consecutive dives (no small feat with an untagged sea otter on a rugged shore), Joe and I scan the kelp bed for the characteristic backstroke attitude of a new foraging sea otter. The team’s bouts of foraging data collection are peppered among our sea otter survey forays, and this expedition has revealed some exciting changes in how San Nic’s sea otters are inhabiting the island. While the kelp beds of places like Rock Crusher on the southwest end of the island still harbor a fair number of sea otters, on this trip our team spotted the highest numbers ever on the north side, an area that has remained largely uninhabited since the translocation. We find the offshore reef known as The Boilers (see Part 2 of this series) is largely devoid of both kelp surface canopy and sea otters. As sea otters are known to do, perhaps they have abandoned the long-occupied Boilers in favor of possibly richer food supplies along the north shore. By shifting habitat use in this way, sea otters may allow prey at long-occupied places to rebound in a sea otter’s version of crop rotation. 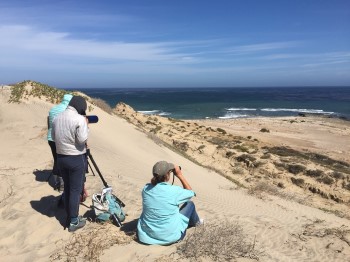 A San Nic foraging team collects foraging data on the north shoreAs the sea otters of San Nic explore, so must scientists follow and the team scrambles to find new observation perches. Even after decades of watching sea otters forage, I still feel an incomparable giddiness as I await the first prey captures at a new location for my favorite sea otters on the planet. Through my Questar I can see a burst of tiny bubbles (air pushed from the fur by the pressure of water) that marks the location of a diving sea otter. As I fix on the location, the head of a sea otter bursts through the surface, and she immediately assuming the belly-up dining posture unique to her species. “She’s up,” I call out, “Success is yes—HOLY COW!”

Stay tuned for part 4 of our series on the sea otters of San Nicolas Island...

The author: Gena Bentall has been studying sea otters since 2001. For her graduate thesis she studied the sea otters of San Nicolas Island. She is now the Program Coordinator of Sea Otter Savvy. 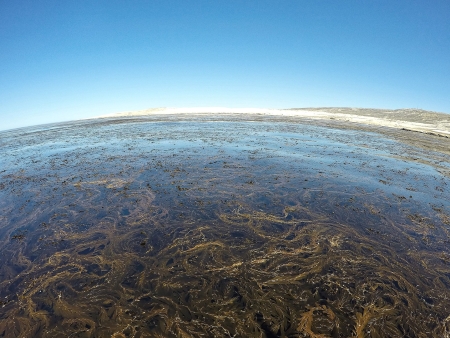