On the Hook: Sea Otters and Fishing Gear Entanglement 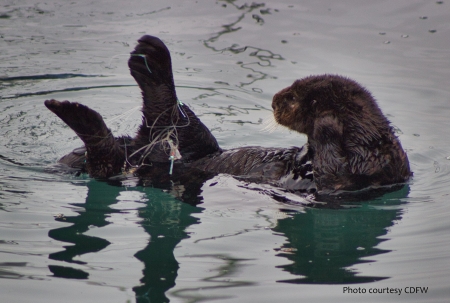 Imagine you are kayaking in the Elkhorn Slough, trying to spot a raft of wild sea otters. You maintain a safe and respectable viewing distance, utilizing binoculars to watch a lone sea otter groom himself and forage for some tasty snacks. Through your binocular, you notice something off about the otter’s behavior. There seems to be an irregular pattern along his fur, with some streaks of pink and red poking through. He is moving slowly, almost lethargically, unlike the usually energetic sea otters you see diving for food when you kayak. Using your binoculars, you can see what looks like string on the otter’s body. You then realize that there is fishing line wrapped tightly around the otter, causing the bleeding and distressing behavior. 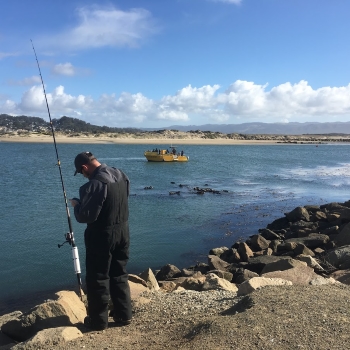 Fishing from shore in a popular activity near Morro RockWhile fishing gear entanglement is a much less frequent threat to sea otters than bites from sharks or disease, lost commercial and recreational fishing gear presents risk of entanglement or entrapment that can result in significant harm or death. The lifestyles of marine wildlife (in particular, seabirds and marine mammals) expose them to these materials, with a chance of becoming entangled in broken fishing lines or left-behind hooks. When a sea otter becomes entangled in fishing gear, they are at risk of starvation, infection, physical trauma, and exhaustion. A sea otter diving and foraging for food or wrapping up in kelp may come into contact with fishing line, hooks, or lures that were lost by fishers, particularly those fishing from shore. Occurrences seem to be most common near piers and jetties, which offer both fishing opportunities for people and foraging habitat for sea otters. Mike Harris, a Senior Environmental Scientist at California’s Department of Fish and Wildlife, and Sea Otter Savvy advisor, reports that he is seeing more frequent incidences of entanglement as sea otters expand their range and become dependent on urbanized habitats like harbors. 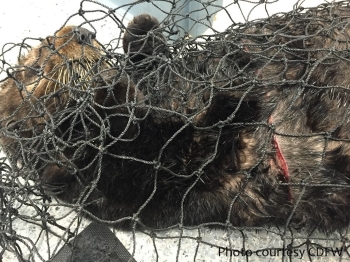 Sea otter rescued by CDFW and Monterey Bay Aquarium staff after becoming entangled with fishing line in Morro BayHarris describes a similar encounter to our imagined one above: Harris was notified by a number of Morro Bay wildlife watchers of a sea otter who had become entangled in fishing line. The line was wrapped so tightly, it was cutting into her skin. After days of capture attempts to free the otter her from the fishing line, they were able to successfully capture the otter and bring her to The Marine Mammal Center (TMMC) triage facility in Morro Bay.  At TMMC, the veterinarian provided care to stabilize the otter in preparation for transport to the Monterey Bay Aquarium (MBA) for treatment and rehabilitation. After months of care, the otter was successfully rehabilitated and released back into the wild, a success for Harris, TMMC, and MBA. Harris has encountered many scenarios where wild sea otters had been entangled in fishing line, and unfortunately, not all stories end as positively.

While traumatic for individuals, injury due to entanglement with lost fishing line is relatively infrequent. Potentially more impactful to sea otters are negative interactions with commercial fishing gear, such as traps (finfish, crab, lobster), and gill nets.

Gill nets are aptly named; they catch fish by their gills. Gill nets work by ensnaring fish with panels of netting suspended from a line held at the surface with regularly spaced floats. They snare indiscriminately, and often trap or ensnare bycatch ─ species that were not intended to be caught.  State and federal resource agencies monitored incidental take in the gill net fishery for many years, and regulations have been implemented that limit or ban the use of gill nets in much of the sea otter’s territory. However, sea otters are not bound to these geographic areas and, as their range expands, they may swim to areas that do not have regulations in effect.

Invertebrates such as crab and lobster are tasty and popular seafood staples for humans. Our love of shelled seafood is a trait we have in common with sea otters. However, our hunt for such seafood has resulted in the use of traps designed to catch lobsters, crabs, finfish, and other shelled animals. Sea otters, also looking for a meal, have been known to swim into a trap in pursuit of one of their favorite prey items. These traps are designed to allow entry and prevent escape, and an unlucky sea otter can become locked inside the trap, ultimately drowning. Officials note that it is difficult to estimate just how many sea otters have died due to trap-related incidences, as consistent observer coverage of such incidences is logistically difficult, and agencies rely, for the most part, on self-reporting by the fishers. 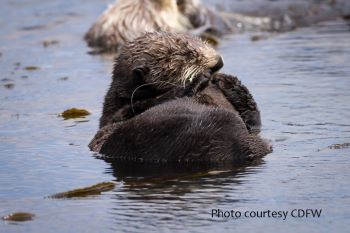 Sea otters can sometimes successfully remove line or hooks with their expert grooming skillsEntanglement-related fatalities and injuries are a concern for agencies protecting sea otters, who include it among the numerous challenges to their survival and recovery. In addition to their fundamental challenge of keeping warm in the cold ocean environment, risk of oil spills, shark bite mortalities, changes in prey availability, and pollution put additional pressure on the survival of one of the ocean’s smallest marine mammals. Harris’ story of one sea otter’s successful rehabilitation and release is a happy one that shines a bit of light on an unfortunate situation, but this story is indicative of a larger issue related to our relationship with the ocean. As an growing human population continues to deepen reliance on the ocean for the many resources and services it provides, the chance of negative direct and indirect interactions between humans and the oceans inhabitants, including sea otters, also increases.

Harris emphasized that entanglement is not done intentionally and that commercial and recreational fishers do not want to lose gear. California has widely eliminated the use of gill nets within sea otter habitat, reducing the risk to sea otters and other marine mammals who would have fatal encounters with gill nets. Therefore, we know it is possible to reduce our fishing-related impacts on the ocean’s inhabitants, but creative solutions are needed to accomplish this goal.

What can we do to prevent sea otter entanglement?

The power of community stewardship 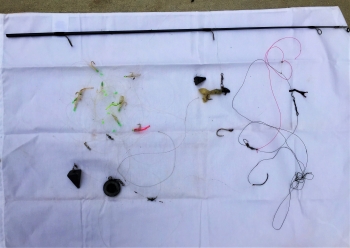 Fishing debris picked up by divers in one dive at Target Rock in Morro Bay. Photo by Mike HarrisAs the Earth’s human population continues to grow, so will the number of people visiting the coast. It has become essential that we adopt sustainable ways to enjoy the ocean while respecting its inhabitants, so we, and our children, can hope to see higher incidences of unfortunate and preventable negative human-wildlife interactions. This article explored how entanglement can be harmful to the sea otter population, but this can be mitigated or avoided by easy and effective actions by beachgoers and fishermen. Picking up and throwing away a broken piece of fishing line is a simple yet highly effective way to help – it may even save a sea otter’s life!

On the other hand, the issue of entanglement, gill nets, and trap-related incidences speaks to a wider issue that needs to be addressed by input from the public (think voting!) and our public officials who have the capacity to implement policy-level change regarding fishing practices that affect marine mammals such as sea otters. Anthropologist Margaret Mead once said, “Never doubt that a small group of thoughtful, committed citizens can change the world; indeed, it's the only thing that ever has.”

Collaborative and sustainable conservation can better ensure that when kayakers go out to watch a raft of wild sea otters, maintaining a respectful and safe distance, the only stories brought back with them are about the natural and charismatic behaviors that Californian’s and tourists adore. 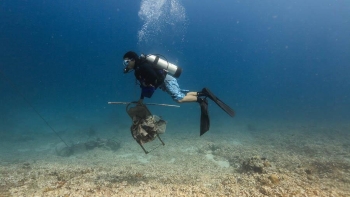 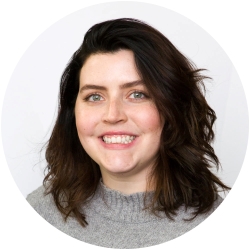 About our guest writer:

Lindsey Popken is a recent UC Davis graduate who is pursuing her masters in Marine and Environmental Affairs at the University of Washington, Seattle. While she grew up in the Sacramento region, Lindsey became interested in sea otters while in college and conducted an honors thesis on sea otter narratives in social media. Lindsey hopes to continue to merge social science and sea otter conservation in her masters thesis.